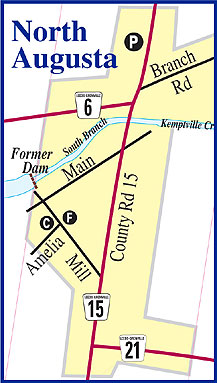 North Augusta is a close knit community of approximately 500 residents located in the north west corner of the township. The village is very accessible to nearby towns and cities, being approximately 15 to 20 minutes from Brockville and Prescott , and approximately an hour from Kingston to the west and Ottawa to the north.

The community of North Augusta is served by Finucan’s General Store/Gas Station, an LCBO/Convenience Store, Frank’s Restaurant/Bar, Foley’s auto wrecker. There are also many other small business ventures located within the area.

North Augusta has one of two volunteer fire departments in Augusta Township , the other located at Maitland.

North Augusta has a community hall which holds council meetings, small concerts and other community functions. The village contains a soccer field as well as a baseball diamond, with leagues running throughout the summer. The community hosts a popular Labour Day event every year. North Augusta is home to a small pro wrestling promotion called Professional Championship Wrestling and sponsors small shows during the summer using many local wrestlers as their main talent.

The Bellamy Grist Mill once located in North Augusta was moved to Upper Canada Village in Morrisburg to become one of the tourist attractions.

North Augusta is best known for its three day Labour Day Festival commencing with a parade and the rest of the weekend filled with a baseball tournaments, chicken barbecue, and many other small attractions and games.